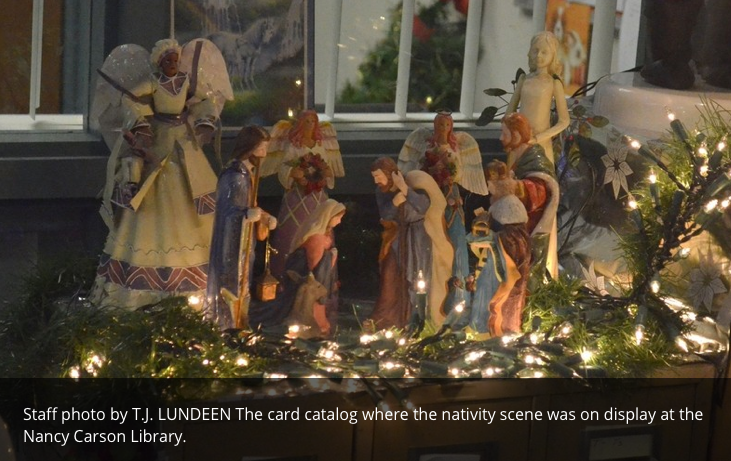 North Augusta, South Carolina represents many things to the residents who call this charming small town home. With a location that is truly picturesque as a riverfront community, the Christian faith that abides with her residents are an important part of who the community is and can be seen in everything including the Christmas decorations.

For eight years, Barbara Walker, manager of the Nancy Carson Library decorates for the holiday season. Part of that display of lights and a stellar tree includes a Nativity scene, Hanukkah and Menorah display. Until this week one complaint, in the form of an email, ended that tradition in the name of “diversity”.

Social media is a powerful tool, and in this case there was no exception. As soon as the news of the request for removal was made known on Monday, the story spread from the community and landed in my news feed on Facebook.

Never known to shy away from situations or a good story, I decided to reach out to our CBS affiliate station (WRDW News 12) and one of its lead anchors, Richard Rogers, and asked if he heard the news. That day the tip of the story was placed in the good hands of one of the station reporters and the next day the story aired. Also on the news station website, a survey asking viewers this question “Do you think a local public library should have religious decorations during holiday season” was included in the story and at the writing of this article 86% of the participants said “Yes”. So why would Mary Joe Dawson, who serves as the regional director of the library take one email and make the decision to order the removal of the religious decorations down?  Two words: “best practices.” Her response:

State Represenative for North Augusta, Bill Hixon, was also involved in the social media pleas to intervene on his Facebook page. Rep. Hixon was shocked as well at the decision to remove the religious decorations stating,

“All this was done because of a email that came from Aiken County to all dept. heads. The interpretation of Mary Joe Dawson was they could not have this scene based on the email she received. Y’all remember this was a very small display inside the building behind the check out desk that belonged to a worker not the county. I’m still getting more info. Why should a few tell us what to do? We have prayer in the HOUSE everyday and say the pledge to our flag. Pray something good can come out of this. I’m still investigating more.”

Amazing how one email complaint by an anonymous person can take eight years of tradition away without any discussion or thought to how the community would feel about the decision. The attack on Christmas and Christian values is most certainly alive and well. However, when the citizens are made aware of situations such as this, they become involved and active in the process. Let your voices be heard.