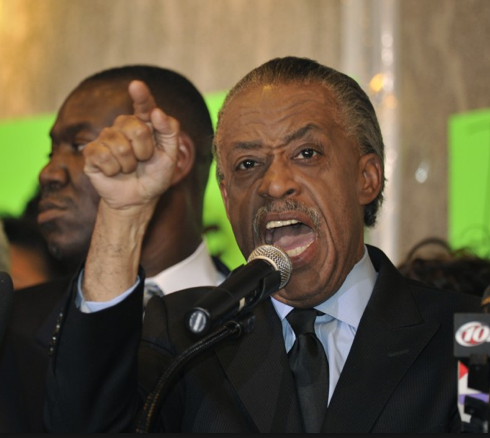 Even excluding the latest incident in the Michael Brown/Darren Wilson case in Ferguson, the Obama administration has consistently included Al Sharpton in major discussions that affect every American in our country. From race relations to economic measures, Sharpton has boasted both on his radio program and his cable show on MSNBC, that he is the “go to” guy for Obama and his administration when it comes to major discussions of policies. One does not have to go far to remember what Sharpton’s history and current involvements equate to; the use of division, hatred and calls of injustice to incite riots or violent protests that do the opposite of unifying in whatever community Sharpton marches in. For the man who calls himself a “Reverend”, it would appear that the Bible is merely used as a measure to pull out subjective verses as gap fillers in his hate-filled rants. So why would a sitting President use a man with such negative history and obvious lack of respect or credibility with his own race and use him so often in such important matters?

Need a reminder of Sharpton’s ideology? Look no further than just a sample of his outrageous rhetoric:

Crown Heights Riots of 1991- “If the Jews want to get it on, tell them to pin their yarmulkes back and come over to my house.” “All we want to say is what Jesus said: If you offend one of these little ones, you got to pay for it. No compromise, no meetings, no coffee klatch, no skinnin’ and grinnin’.”

Freddie Fashion Mart Massacre of 1993- “I want to make it clear to the radio and audience and to you here that we will not stand by and allow them to move this brother so that some white interloper can expland his business on 125th street.” “We are not going to stand idly by and let a Jewish person come in black Harlem and methodically drive black people out of business up and down 125th St. If we stand for that, we will stand for anything.”

On the Tawana Brawley Rape Case of 1987- “The Brawley story do (sic) sound like bull****, but it don’t matter. We’re building a movement. This is the perfect issue. Because you’ve got whites on blacks. That’s an easy way to stir up all the deprived people, who would want to believe and who would believe — and all [you’ve] got to do is convince them — that all white people are bad. Then you’ve got a movement…. It don’t matter whether any whites did it or not. Something happened to her … even if Tawana don’t (sic) it to herself.”

On the Trayvon Martin Case of 2012- “You are risking going down as the Birmingham and Selma of the 21st century.”

On the Michael Brown Case of 2014- “I can call a march and thousands come out, and I happen to have access to the White House at the same time,” he continues. “This is a very unique time. Let’s see where it goes.” “There are those who say peace, what they really mean is be quiet. Don’t suffer in silence.”

Supporting Barack Obama for President- “The dream was not to put one black family in the White House, the dream was to make everything equal in everybody’s house.”

On Shaprton’s MSNBC show Politics Nation discussing voter ID laws- “We need an amendment that gives us the right to vote protected by the federal government and the Constitution.”

Speech at Ken College in New Jersey, 1997-“White folks was in the caves while we was building empires,” he said. “We built pyramids before Donald Trump even knew what architecture was…We taught philosophy and astrology [sic] and mathematics before Socrates and them Greek homos ever got around to it…Do some cracker come and tell you, ‘Well my mother and father blood go back to the Mayflower,’ you better hold your pocket. That ain’t nothing to be proud of, that means their forefathers was crooks.”

What exactly does Al Sharpton have on his side for credibility to be offered such a prestigious position as an active advisor for our government? Aside from the fact that Sharpton has dodged his tax burden of $4.5 million up to this point without prosecution (something the average tax payer could not get away with), he does not appear to be high on the paid speaker list for his vast knowledge on how to be financially successful at being a race merchant. It is stunning to consider that Sharpton would then be so well-received in a building that is supposed to be representative the “people” of this nation.