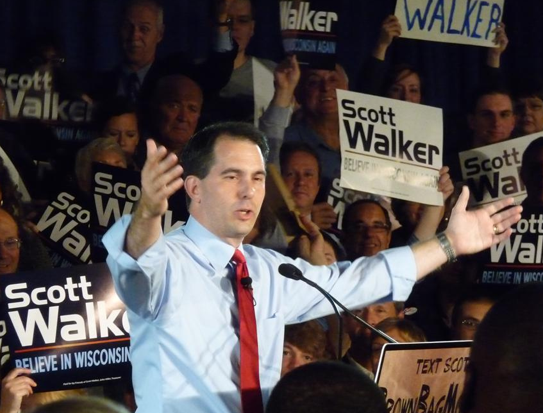 Amazing, extraordinary, sensational, and unbelievable are just a few of the words that describe Governor Scott Walker of Wisconsin.

He became involved in politics in the early 90s serving in the Wisconsin State Assembly and later Milwaukee County Executive, each time running as a fiscal conservative and winning with decisive victories. From the beginning he has been tough on crime, pro-welfare reform, and pro-life and to those things he has held steadfastly and unwaveringly.

The eye of the nation focused on Scott Walker when he, a Republican, became governor of Wisconsin, a very blue state, and immediately began practicing what he preached, so to speak. His conservative agenda, which includes reduction of taxes, has resulted in unparalleled new employment which has brought forth a great budget surplus for the State of Wisconsin, and it continues to self-perpetuate.

But his most Herculean task was his successful taking on of the seemingly all-powerful teachers unions. His victories with the unions benefitted Wisconsin school children for sure, but it put the liberal Democrats’ hair in knots and brought the poison-fanged labor union thugs to Wisconsin seeking Gov. Walker’s jugular. It is not enough for these villains to win elections; they used every tool at their disposal to impugn his character, demoralize him, and even to make death threats against Gov. Walker and his family. Regardless of all, Gov. Walker has won the past 3 elections, including a recall.

Believe me, I have barely mentioned the high points in what Gov. Walker has accomplished and what he and his family have faced and lived through. Yet, he has not wavered or equivocated, complained or whined. He and his family have stood tall throughout the entire ordeal.   I am in awe of the Walker family; they encourage me and set an example for all of us to follow.

Back to Sir Winston Churchill– My father is a WWII hero who taught me about Sir Winston Churchill. In our house Sir Winston is almost holy, and so I do not make this comparison lightly. The parallel I see in Sir Winston and Gov. Walker is that no matter what the opposition throws at them, they have the absolute courage of their convictions. They clearly see the way, they do not permit themselves to become distracted, and they go for it, never taking their eye off the goal because they know with certainty that they will reach that goal and that the final result will be precisely what they envision.

Conservative candidates take note: This is how elections are won; this is how we will take back America.

The Fabulously Funny "Nichols & May"

Should Al Sharpton also be investigated for extortion?