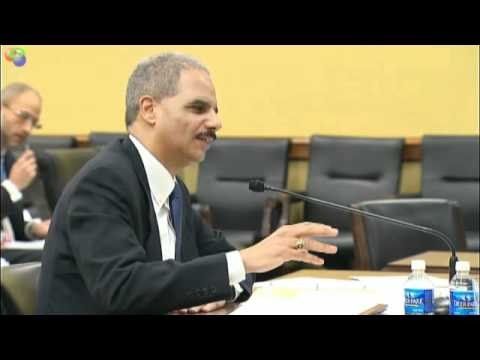 Eric Holder is the fourth longest serving Attorney General and one of the last original Cabinet political appointees. His recent resignation was celebrated by those on the Right politically.

The Attorney General leads the Department of Justice. He is nominated by the President and confirmed by the Senate and is a member of the Cabinet. The U.S. Justice Department is one of the most powerful executive branch agencies in the federal government. It is responsible for the enforcement of the law and administration of justice.

“Justice requires someone who understands that, while the attorney general is a political appointee, he (or she) has a sworn duty to uphold the Constitution and enforce the law in an objective, non-political manner. For the most part, Eric Holder failed in the execution of that duty.”

Has Eric Holder upheld the Rule of Law, the Constitution? Has he enforced the law in an objective, non-political manner? Here are just a few incidents to reflect on:

According to various media such as CNN and The Washington Post, the IRS used keywords in the applicant’s names or descriptions to trigger the discrimination such as:

While the agency attempted to assign the injustice to low-level employees, the Republicans refused to overlook Lois Lerner, then Director of the IRS’s Exempt Organizations Unit, potential part in the controversy as she invoked the Fifth Amendment at the hearings.

“It is the height of hypocrisy for the Obama Administration to claim that the investigator leading the investigation into the IRS’s illegal program has no conflict of interest. The investigator is a partisan Democrat who has donated over six thousand dollars to President Obama and Democrat causes. Just as nobody would trust John Mitchell to investigate Richard Nixon, nobody should trust a partisan Obama donor to investigate the IRS’s political targeting of President Obama’s enemies. Sadly, “in the discretion of the Attorney General,” Eric Holder has chosen to reject the bipartisan tradition of the Department of Justice of putting rule of law above political allegiance.

The integrity of the Department of Justice deserves better. The American people deserve better.”

Darrell Issa, Chairman of the House Oversight Committee spoke for most of the political Right, calling him the most divisive in modern history, reported by Townhall,

“Eric Holder is the most divisive U.S. Attorney General in modern history and, in a vote supported by 17 Democratic House Members, has the dubious historic distinction of being the first Attorney General held in criminal contempt by the U.S. House of Representatives. Time and again, Eric Holder administered justice as the political activist he describes himself as instead of an unbiased law enforcement official. By needlessly injecting politics into law enforcement, Attorney General Holder’s legacy has eroded more confidence in our legal system than any Attorney General before him. Through strong arming reporters, practically ignoring high level wrongdoing, blocking his own agency Inspector General’s access to information, and overseeing a Department that attempted to stonewall Congressional oversight with denials of what is now established fact, Attorney General Holder abused his office and failed to uphold the values of our Constitution. While President Obama and the Senate should work expeditiously to find a replacement, time and care must be taken to ensure that our next Attorney General recognizes and does not repeat Mr. Holder’s mistakes.”

Adam Lanza Was NOT a Homeschooler.

"Left Behind" Author Jerry B. Jenkins Opens Up On Movie Reboot