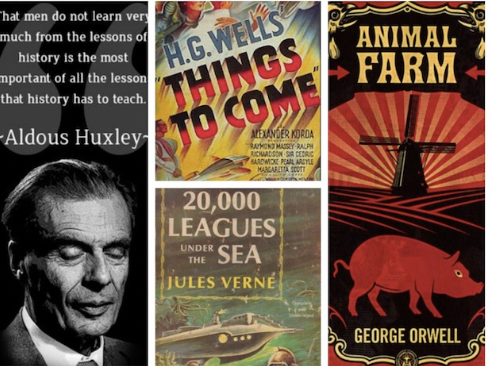 Aldous Huxley, H.G. Wells, Jules Verne and George Orwell are gathered in their eternal resting place, and are settling in for their daily roundtable concerning the state of the world as they see it.

Gabriel, God’s chosen ethereal attendant for various of the transitory and recalcitrant dissenters of the God who created them, has seated them for their extraterrestrial privilege, and drawn back the curtain that opens a special window wherein they observe and discuss the doings of current earthlings’ behavior. They are allowed such a privilege based on their near conversions to actual belief that God exists.

Verne opens: Greetings, and hail hearty, gentlemen. Shall we resume the current issue of a world without America, or is there something more pressing?

Orwell, the youngster at the table, speaks: I find that we need to begin with the issue we have all been addressing for decades, the idea of a free and self governing nation that has no controllers making rules that only they are exempt from; ie the way of the world inAnimal Farm, when I first tried to warn the citizenry of fascism taking charge of their lives. You know, when the smartest animals take over the farm and……

Huxley interrupts: George that is all you want to talk about! We have spent an eon on that already and I really want to go on to something more vital: mind control. Brave New Worldtold the story there, with test tube babies and building the human body as it should be, the mind directed as it should be. What better way to control the willful ones who want to do everything their way?

Wells, inserting his superior age and wisdom into the discussion:  Wait a minute, Aldous. Have you forgotten how poorly that turned out, when the mixture of drugs and mental health went awry? You even borrowed from Shakespeare for that catchy title, quoting Miranda on seeing her first man, “O brave new world that has such creatures in it”. Her father, after all, had isolated her from seeing any man other than himself until she was full grown.

You are both misguided on the most important issue. Have you all failed to check the today view of the universe? Just look past your own thinking and see what is going on from a different viewpoint. Open the Earth Viewer Window that we need to use now, and let us observe the results of the most recent turmoil. Focus on Great Britain first, please.

Verne: Yes, thanks, Gabriel, for allowing the curtain to be drawn. We here have finally learned the way of the world was not ours to direct, and thank God again for allowing us this Semi-space to see what has been wrought. We all tried to warn them, after all.

Gentlemen, look again at the way of things. Turmoil, strife, religion versus social status. They have lost the common core, so to speak, and are worshipping the wrong idol, Humans. They learned nothing from the most vicious of all villains, Captain Nemo and his submarine invasions of any and all places he wished to conquer or dominate from afar. It was fear that won, and he had introduced a weapon that no living person outside his sycophants and indentured slaves could even understand.

Orwell again: True, Jules, but you were way before your time. Your vision was at least a century before the world was even near ready for your work to be believed. Who could accept the notion of men living under the sea in a machine never even dreamed of by normal people? Nemo was a genius on the wrong side of humanity, but his creation surely was copied later for others to use, for both good and bad. Very serious war machine, the submarine.

Verne: Ah, George, you were also far ahead of the field. You were labeled ‘science fiction’ or ‘realism’ by people who saw no further than the windowsill, not able to grasp what was far outside the window.

Orwell: (a bit defensive) Well, yes. But not everyone got that right away. I wrote 1984 in 1949 when I was just beginning to see what I wrote as fiction turning into truth. We all tried to tell the story, how mankind was trying to create itself. Yes, mind control is real, and we can look down on the British Empire as the birthing place of most of our futuristic visions. We were before our time, and I was not yet 50 when I came here. All of us saw the world with different eyes.

Verne: Yes, that is absolutely true George. I wrote From the Earth to the Moon in 1865. Oddly, another story title told that the first moon shot was launched from only a few miles from Cape Canaveral, many years before the NASA trip.

I find it marvelous that we who spoke so much earlier were so often used for those who came much later and proved us to have been correct.

Wells had been quietly taking in the remarks and now cleared his throat and began: I have listened quietly and nodded now and again either for or against what I was hearing. Man is in nature prepared for two things, those being the most caring of all creatures in protection of his family, and the most vicious of all creatures in protection of his family. That was something similar to the doublespeak of mind control in the Orwell story. But I noticed a youngster a decade ago had a saying that we must adopt. In Brave New World the test tube babies were divided into categories and called by that title, such as Alpha, Beta, and so forth to divide and control. In The War of the Worlds mind control was nothing when fear could be instilled by creatures from another entire system….the machine.

In essence, we have spent our visions and wisdom, such as it were, all directed to the same theme: mind control. When a person is convinced that red is better than blue, it is impossible to reverse that conviction, and perhaps a bit of persuasion is needed. Hence, depriving, isolating, changing rules, all devices available are applied. Oddly, Soma, the mind control drug of choice, is now a label on a ladies’ undergarment. Soylent Green, which is not mentioned among us, is a solution for world hunger. And since we here are all armed with the same weapons in effort to warn our fellow humankind, I will quote the youngster I heard, albeit in improper English: Ah toad ya so, he said, and I translated to better speech, but absolutely correct: I told you so. Science fiction, realism, whatever we are labeled, can be a warning for things to come, and we may rue the day when such is proven true.

Gabriel has now closed the curtain, but the story is not over.

Obama Has Little Patience For Our Border