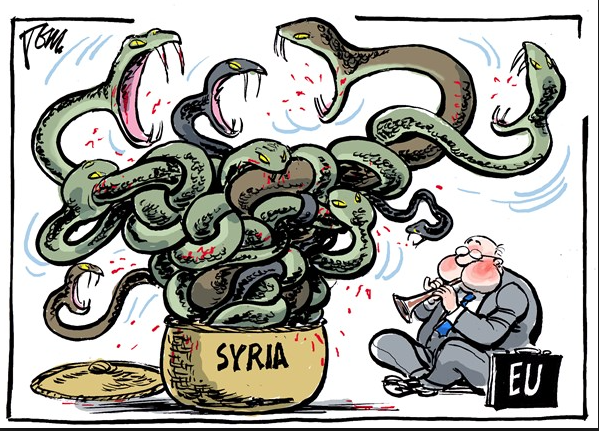 John McCain and Lindsey Graham are nothing more than wolves in wolves’ clothing. Photo-op ready McCain and Graham announced they would support President Obama’s retaliatory strikes against Syria for the use of chemical warfare by President Assad if–and it’s a big if– Obama agrees to provide more arms and support to the Islamist Jihadist rebels.

“We still have significant concerns, but we believe there is in formulation a strategy to upgrade the capabilities of the Free Syrian Army and to degrade the capabilities of Bashar al-Assad,” said McCain, ranking Republican on the Senate Armed Services Committee.  After an Oval Office meeting with President Obama, McCain said he is more supportive to a U.S. strike-partly because of the prospect of increased support for the rebels.

Every 15 seconds, one person flees Syria. There are over 2 million Syrian refugees, with at least one million children displaced from their homes. According to the UN High Commissioner for Refugees, this is “the greatest tragedy of this century”.

Overall, over the course of two and a half years, more than 4.25 million Syrians have been effected–many of them Christians…who support President Assad.

One could—and should—ask, why would Syrian Christians support Assad, a brutal dictator who allegedly gassed his own people? Several Church leaders have voiced an interesting perspective.

From Voice of the Persecuted [all emphasis mine], “The head of the Maronite Catholic Church has accused the West of deliberately fomenting sectarian unrest in the Middle East for economic reasons and at the expense of millions of Christians. Speaking from Lebanon, where thousands of Syrians have fled the conflict in their country, Patriarch Cardinal Mar Bechara Boutros al-Rai, the Maronite (Lebanese Catholic) Patriarch of Antioch, went so far as to say that there is a plot originating in the West to destroy the Middle East.”

The patriarch told Vatican Radio of his fears of a plan to destroy the Arab world for what he said were ‘political and economic interests,’ saying he had already written to the pope twice warning of this.

The West, for reasons of economics, have contributed to the ‘wars without end’ in the Middle East “by giving billions of dollars to the [Egyptian] Muslim Brotherhood, so that they could get into power.” He added that in such conflicts in the Middle East, it is always the indigenous Christian populations who suffer most, “as if they were always the scapegoat.”

“As always, when there is chaos or war, Muslims in general attack Christians, they use them as scapegoats. I am sorry, but in Egypt the Muslim Brotherhood were the ones to attack Coptic churches – and Copts as well. Unfortunately this is the mentality of certain Muslims: every time there is a situation of chaos, Christians are attacked without even knowing why.”

“There is a plan to intensify inter-confessional conflict in the Muslim world, between Sunnis and Shi’ites,” he told Vatican Radio this week. “Unfortunately this is a policy that comes from abroad. There are countries, especially Western ones but also Eastern ones, that are fomenting these conflicts.”

“In Iraq, out of a million-and-a-half Christians, we have lost one million without hearing a word from the international community,” he added.

At the core of the crisis in the Middle East is the “grave moral and economic crisis” of the West. Its “distorted idea of progress” stems from its “distorted view of man,” a highly placed Catholic prelate in Egypt has said.

Monsingor Giuseppe Nazzaro, the Episcopal Vicar for the area of upper Egypt and Cairo and former Vicar Apostolic of Aleppo told the Italian paper La Perfetta Letizia that everything that is happening in Syria “comes from the inability to understand that peace is not achieved with war.”

Inside Jerusalem’s Orthodox Patriarchate, Archbishop Theodosios (Atallah Hanna) of Sebastia, also referred to the “supporters” of the “ruthless terrorists” seeking to destabilize the Middle East.

He said that there are those who want to bring Syria and the whole Middle East back to an era of ignorance, a new “dark ages.”

The same groups setting fire to churches in Egypt are the ones who “want to destroy Syria.”

These “enemies of Syria,” he said aim at destroying the Arab communities and “national unity, and fraternity, and religious values.”

Rand Paul recently wrote, “If the debate were to come to Congress, two great ironies would have to be overcome:

1.The arms supplied to the Islamic rebels may well be used against Christians;

2. The Islamic rebels we aim to arm are allied with al Qaeda.”

“I think the Islamic rebels winning is a bad idea for the Christians. All of a sudden we’ll have another Islamic state where Christians are persecuted,” said Rand.

Yet, McCain and Graham want increased support for those same rebels, those barbaric murdering organ-eating Islamist Jihadists. Whether President Obama receives congressional approval should not be contingent on whether our government actively funds terrorists in the Middle East who clearly hate America, as McCain and Graham desire.

Here’s a novel idea. How about our Representatives become strong enough to throw down the gauntlet with this administration?  Use the big “IF” in this way:

“If we support you in your retaliatory efforts, President Obama, not one thin dime of our U.S. tax dollars are to be spent funding ‘rebels’—unless and until they stop their incessant compulsion for purging Christians from the Middle East.”

Truth is Stranger than Fiction