Recently I completed a three day trip to Washington D.C. The purpose of my trip was a series of meetings built around my run for the 24th Congressional seat of California next year. I was traveling with my fiancée, Doreen Corkin, my campaign’s CFO, Olaf Halverssen, and his son Axel. We were shepherded around by Thad Strom, VP of Congressional Relations at the lobbying firm of Parry, Romani, DeConcini & Symms. (Steve Symms is a former member of both the House and the Senate.)

I met with Robert Jones, The Western Divisional Director for the NRCC (National Republican Congressional Committee) which directs national support to candidates they think have a chance of winning their seat. Robert will be setting up a meeting for me with the NRCC Chair, Congressman Greg Walden, at the California State Republican Convention in October.  Senator Symms took us to lunch at the Senate dining room where he introduced me to Senator Phil Gramm. My dear friend and CFO Olaf ran into a buddy of his from Florida, Senator Marco Rubio, so we had a moment to chat.

From there, I went to the office of Congressman Tom McClintock. I brought him up to date on what was happening with my race. He reaffirmed that I am one of three candidates he is endorsing for the primary. (A primary endorsement is a rare thing for a politician to do.) We discussed some future help he can do for me in D.C. on my next visit.

That covers what I was doing socially and for my campaign–but I want to tell you two things that are the “buzz” in D.C.

The first involves the debt ceiling and the move to defund Obamacare. The truth is, most of us conservatives, heck, most of America, want Obamacare to go away. The reality is, if the House attaches the debt ceiling to defunding, the “King of Constipation,” Harry Reid, the man who blocks nearly all bills coming out of the House from reaching the floor of the Senate, will block it.  It has no chance of reaching Obama and the resulting shutdown of government will be blamed on the Republicans. (Although the shutdown of government means they can’t waste our money!) Bottom line: Although it would be good to see the Republicans show some gravitas, it would be better to “demand” things that might actually have a chance of getting through.

The second is the observation that the Democrats are fractioning. This is mostly because of the unconstitutional actions of a number of government agencies (the IRS comes to mind…), but also because of the debacle in Syria, building on Benghazi and all the other scandals. The Democrats, who have followed Obama “for the good of the party” but are not socialists, are finally saying, “Enough!” 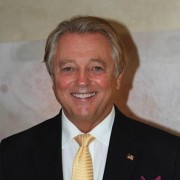 Chris Mitchum has appeared in over 60 films, starring in more than 50 with John Wayne, Maureen O'Hara, Ernest Borgnine, Charlton Heston and many more, including his father, the late Robert Mitchum. His career has taken him around the world to some 14 countries, earning him such awards as the Golden Horse (Chinese Academy Award, 1981-1982) and The Golden Reel, Best Actor, (1988, Indonesia), as well as the Photoplay Gold Medal Award for Best New Actor, 1972, and Box Office & NATO Top Ten New Stars, 1972. Known best as an "action star", Chris often has performed his own stunts, "Age, and a number of scars, brings wisdom. It's amazing I've survived my youth!" Chris's political training began when he spent six years on the Board of Directors at the Screen Actors Guild. He also served two years as National 1st VP, making him the number two person leading a 74,000 plus member National union â€“ the same political training ground as SAG President Ronald Reagan. His next boot camp came when leader of the Republican Assembly in Sacramento, Bill Leonard, asked him to run for State Assembly in 1998. Chris Mitchum is a leading political activist in California and in 2014 he ran for Congress in the 24th congressional district in California.

Who Vladimir Putin Really Is