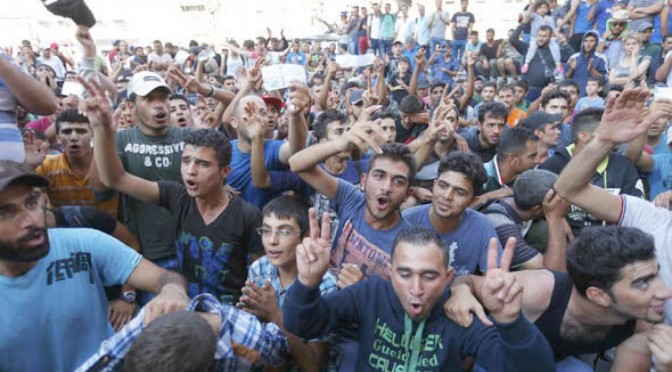 Politics does indeed make strange bedfellows. What could be stranger than the thought of Tea Party conservatives, libertarians, and progressive Democrats uniting to defy the White House in its decision to provide military assistance to Syrian rebels fighting to oust President Assad? Thanks to President Obama’s foreign policy shift, these polar opposites are finding themselves uncomfortably rolling together under the sheets.

When Obama suddenly reversed his stance against intervening in Syria and urged Congress to arm opposition militants and move more troops into Jordan, some politicians, including photo-op-ready John McCain, not only praised his decision, but pressed the President to do even more by creating a no-fly zone over Syria. Both sides of the aisle opposed to intervention immediately went into combat mode frantically fighting to stop an American presence in Syria as evidenced by the introduction of three separate bills this past week, including one bi-partisan, in the House to prohibit funding.

Interventionist opponents assert that if the United States becomes involved in the Syrian conflict by providing arms to Islamic militants, the United States will be knowingly arming Al-Qaeda.  Sen. Rand Paul (R-Ky.), who joined other members of the House at a press conference this past week said, “The Use of Authorization of Force [AUMF] in 2001 said we could go after the Taliban, Al Qaeda and associated forces,” Paul said. “Now we will be arming forces who are actually associated and fighting on the same side as Al Qaeda.”

Another issue causing great consternation within the House is the willingness of President Obama to act (again)- with or without approval from Congress. Rep. Walter Jones (R-N.C.) has threatened to try to impeach President Obama if U.S. soldiers were killed in a Syrian operation that Congress did not authorize.

“No president, Democrat or Republican, should have the authority to bypass the Constitution, the will of the American people, and bomb a foreign country because he does not like the leader of the country,” Jones said.

Many Democrats and Republicans alike are adamant in opposing intervention with nearly 100,000 Syrians massacred in the last two years. They are increasingly concerned that U.S. military intervention will only intensify the bloodshed. “There is a humanitarian disaster. But that doesn’t mean that what we do in arming the rebels will be effective in achieving the goal,” Peter Welch (D-Vt.) said. “It raises very serious questions about whether, in fact, we end up Americanizing a civil war.

The “freedom fighters” that Obama, McCain, and their ilk want to arm are responsible for countless atrocities against the Syrian people, particularly Christians.

If these examples are not enough to convince Obama that arming the rebels would be complicit in aiding and abetting the persecution of Christians in another Mid-Eastern country, he might want to check the poll numbers.

According to a recent Pew Research poll, 70 percent of Americans are against sending military support to the Syrian rebels with the majorities of all partisan groups opposed.  President Obama, receiving backlash from Republicans and Democrats, would be wise to listen. Stay out of Syria.

Lessons from the Left: The Democrat Party Newsletter

Wendy Davis: Why I refuse to wear her shoes.